All WAR depends upon on it!

Friends countrymen and non countrymen but friends just the same! lend me your eyes!. Do not pluck thine eyes and post them to me via FedEx, for that would be to take me far to literally, but use them to peruse mine blogeth post that I have written for thou and thou’est counterparts!. Whoa sorry about that I came over all peculiar for a second there. Maybe I was a roleplayer in a past life :P.

You have mostly likely noticed from my past entries that I’m a bit on the lazy side when it comes to taking screenshots in-game to add alongside the text and make things a little more lively. Well I intend to rectify that in the future starting now with a few pics of my currently most played mmo characters.

We shall start with Warhammer online firstly with my Choppa ‘Gaztrick’

In these next two I should like you to meet ‘Gursh’ the Black Orc. 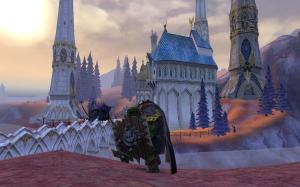 Here we have my current EQ2X Character ‘Gazroony’ in his New Halas two room apartment. 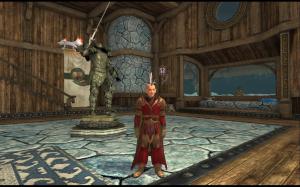 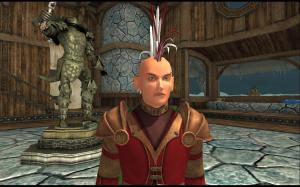 I spent this weekend mainly decorating the spare room which we have decided to rent out to make some extra cash. So gaming fell to the wayside a little /sad panda . I did manage to play some Monday Night Combat and Juiced 2 on the Xbox 360. Also I went dungeon crawling in a shared level 20-30 dungeon called Stormhold in EQ2X with some of the ‘Tuesday Noob Club’ guild members whom I met through Vanhemlock.com and the Warhammer guild I am in called ‘The Hipster Battalion’. We thoroughly ransacked the place gained lots of xp and aa and had a very good time doing it right into the small hours of Sunday morning.

I managed to persuade a friend to come and try Warhammer with me too. He has always been dubious of it because he is not a big fan of PvP games but buckled under my massive peer pressure and signed up to the trial I sent him. After a couple of hours he had sampled open RvR and scenarios with me and as I suspected there was much complaining and muttering when he got killed. At one point he almost rage-quit after a particularly tough scenario after which we logged out for a break and had a chat about what happened.

Basically he was just taking it too personally when he was getting killed, that was it in a nutshell. He said he just does not like getting killed in games it annoys him to the point of distraction especially when it’s another human player doing the killing. This is all a fair point of view of course which I respected enough to not argue with him. I simply stated something I remembered a character in the popular WW2 mini series Band of Brothers said to a reluctant soldier in one particular episode.

“Do you know why you hid in that ditch Blithe ?………..You hid in that ditch because you think there is still hope………but Blithe, the only hope you have is to accept the fact you’re already dead, and the sooner you accept that the sooner you’ll be able to function as a Soldiers supposed to function, without mercy without compassion without remorse; all war depends﻿ upon it.”

Ltnt Speirs to Pvt Blithe at the Battle of Bloody Gulch.

Here is a clip in case you never saw the program. It’s quite a poignant moment and one of my favorite parts of the series.

Thanks for dropping by again!

Be well, do good work and keep in touch with your friends!

2 Responses to All WAR depends upon on it!