Of Fable 3 and dreams!(no spoilers)

Hello everyone I hope you had as much fun at Halloween as I did with my family. We carved pumpkins,made Halloween cookies and pumpkin cup cakes which were quite delicious even if I do say so myself. The kids made out like bandits on their trick or treat run and had a great time dishing out the candy to the kids and shameless adults that came knocking at our door. Next stop:Guy Fawkes night!!

So I’m sure you have noticed a lack of activity from me here over the last week and in short it is due to the fact that in all honesty it’s hard to blog about your console game habit. When it’s a mmo you are blogging about other players will eat up your stories,guides,blow-by-blow accounts like hot cakes because mmos are never-ending ongoing content. Console games however are a different kettle of fish, I mean, how can tell you all about what I got up to in Fable 3 this weekend without spoiling the story? in short, I can’t.

I will tell you that I enjoy the mini games in this iteration of Fable, Lute Hero can be devilishly frustrating when you build up a good strumming speed. Also pie making can be quite a fun way to make a quick few gold on the side plus an achievement. I wanted to make this character more of a magic user since in Fable 2 I was all ranged with a clockwork rifle. However I have ended up going down the ranged combat with a rifle road again, oh well the mind wants what it wants I suppose. I quite like the change in combat mechanics although maybe some might feel it’s dumbing down the game slightly, but to me it makes combat flow better and more cinematically. I have had a couple of genuine belly laugh moments already and like it says on the box lots of hard moral decisions.

So as I mentioned I can’t say a lot more without ruining it for you guys but I will say it is definitely worth grabbing this game. I don’t often pay full release price for a game but Fable 3 is worth every penny.

I finished catching up on season five of Supernatural at the weekend and BOY!! what a finale. This show knows exactly how to pull your heart-strings and it’s just the most amazing story. The whole concept would work so very,very well in a video game, it’s a no brainer really. Someone should make a video game of this TV show, not a mmo though because not everything has to be an mmo does it?, but a single player/co-op for consoles and PC. Imagine it! you and a buddy with the whole of America open GTA style to search for ghosts,monsters,demons any manner of unnatural beings to hunt. You keep an eye out on TV,Newspaper and Worldwide web for unusual events to investigate, some of which may be small isolated hunts others part of the bigger ongoing background story arc. All while driving a super cool black 67 Chevrolet Impala and to a soundtrack of the most awesome classic rock, Man I want that game now!!! (Fanboi much!!) 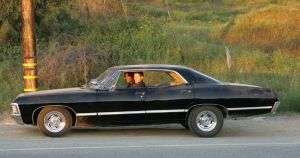 Be well, do good work and keep in touch with your friends!

35 year old social gamer on Xbox 360 and PC platforms Big fan of the Harry Potter series, like a freaky anorak knows to much fan lol. Raptr - Gazruney XBL - Gazruney
View all posts by Gazruney →
This entry was posted in Uncategorized and tagged Fable III. Bookmark the permalink.

3 Responses to Of Fable 3 and dreams!(no spoilers)